by Alison | Stories, Your Crochet Business

Joe was married and had three kids at school.

His talent was crafting wooden doll‘s houses. With having two daughters he had made the first doll’s house when the girls were very young and they had hours of fun playing with it.

Joe worked in a factory. He did not earn much and Christmas was coming.

That year he designed a traditional doll’s house. The roof was painted in magic green and this set off the rustic style of the house beautifully.

The side hinged out so a child could play with the dolls and furniture and live out a fantasy life in miniature. 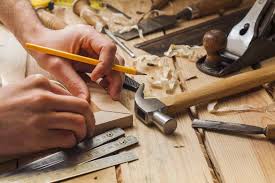 One year Joe made a sample house and invited the neighbours around to see and hopefully to take orders.

Joe got ten orders for his doll’s house that night. That meant he had four weeks to complete the work. He was excited.

The next Monday be received an order or another five houses from the original people who had seen the sample house, and who had told their friends. And so it was. Joe had verbal orders to build fifteen wooden doll’s houses by Christmas Eve.

He worked a forty-hour week at the factory and then every evening after dinner he started sawing and nailing wood in his garage. He worked every weeknight until midnight and all day at the weekend.

It took time. Every piece was cut and sanded by hand. The sides were glued and nailed together. The paint had to dry

He took pride in his work.

In the end he made the fifteen doll’s houses.

He was paid for ten as he delivered them the day before Christmas Eve but did not get paid for the final five.

Why, because he was too late in delivering them (the plan was Christmas Eve) but the people who had ordered the houses from him got nervous, that they would be let down, and so they bought other gifts for their kids.

That meant they did not have the cash to pay for the doll’s houses they had ordered from Joe.

In the end Joe broke even and was left with five doll’s houses.

Of course he may have broken even in the money numbers, but he was not compensated for all the work he had done for the past four weeks. That effort he was not paid for.

He was tired and had no extra cash for his family for their Christmas meal and gifts.

During the New Year he managed to sell the other houses eventually.

This happens often that crafts people go into micro businesses (which is what it is if you make things to sell) not fully understanding the time commitment required and how to price correctly for their hand made goods.

How you can benefit in your micro business

You can benefit from Joe’s story in your micro business.

There are a few things you can do to improve how you manage you small craft business and I will discuss them in future posts.