Features of a crochet diagram pattern

Let’s look at each one by itself.

It assumes that – you speak English

I speak English as probably you do to as you are reading this. But I also like to use patterns from other countries.

I think the Japanese crochet diagrams are the best. They are clear and precise and I don’t have to read Japanese to use the patterns.

Likewise, if I design a crochet garment and I only write the pattern in English words, then other world wide crocheters can’t read my work.

I want my designs to be used by all crocheters and that is why I write the pattern in English and draw the crochet stitch diagram to go with it.

Almost every pattern on my site and my books are both written and have a diagram.

The difference between UK and USA crochet stitches and why the diagram is clear.

The actual stitch is the same but the name of the stitch is different.

It assumes that – the pattern is written correctly

In a written crochet pattern there are lines of code for the pattern rows. Such as:

Now in the above sentence (if it is a sentence), any error in the typing (a typo) will create an error in the pattern. And the crafter will not be able to complete the garment because she can’t read the pattern.

In a long pattern with motives, sections and finished borders there could be over 100 lines of pattern instruction. One line will create a problem and often there are two or three errors in a pattern. 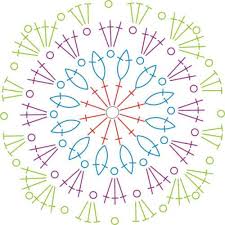 This makes the whole job a frustration and the crocheter may give up and (this is the worse part), tell others that your patterns are always incorrect and they should avoid them.

This is not good if you are in the business of selling patterns.

It assumes that – the instructions are clear

There comes a time in written crochet patterns when they will benefit from more explanation. This is achieved by expanding on the instructions and writing instructions in plain English.

We can all do with clarity at times. And crochet patters are no exception.

If a pattern is too hard to understand because of how it is written then it will not work. That pattern is no good.

In diagram a there is one symbol for every stitch. 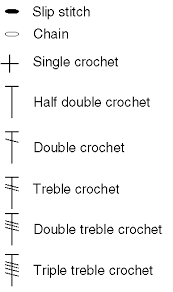 Each symbol is drawn separately.

Each row is numbered.

Every row has an arrow indicating which way the row is worked. Either left to right, right to left or in the round.

Typically each Rosie drawn in a different color so you ca clearly see which row you are on. Here I use black and blue to separate the rows.

A picture is worth a thousand words. And this is true of crochet diagrams.


Get our Crochet newsletter

Learn about the 3 types of crocheter; casual, hobb

Dabbling with a filet crochet border for my guest

Journaling is hugely popular now both for self-ref

My filet crochet tea towel is now complete and I j

I’ve been meaning to buy tea towels for long tim

Q – What do crocheters do all day when they are no

Todays little doily. ⠀
I just used up some Vanna