How I Got Into Crocheting at Jeppe

Picture this, the Seventies, Africa, the story unfolds…

Way back in the day when I was at Jeppe Girl’s High School we crocheted blankets for the people of Johannesburg.

Each class had to produce as many crocheted blankets as they could. Each girl had to make at least one blanket.

The school year began in January and at the tender age of thirteen I was crocheting with the best of them.

We used 4ply wool in those days and a 3mm hook. Each motif had to be 10cm (4”) square so as we did one it was put in the box and the teacher sewed them up at night.

There was competition between the girls and, 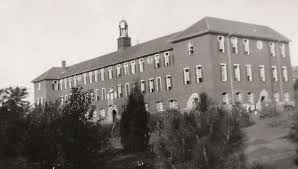 although you made common squares, you were expected to work on your own blanket as well.

That meant you needed 180 squares at 10cm x 10cm or ten squares by eighteen squares to make one blanket.

On top of that you had to do a border of about two to three centimeters wide to finish your blanket off properly.

How long did each blanket take?

So, each square took half an hour and you could make two squares every hour. That’s 90 hours just for the squares.

The sewing up took another while as well. On average you could crochet about three squares a day and many more at the weekend.

Remember, this was the high school years and we had full classes including sport and homework every day.

We had to buy our own wool to make our blankets.This was a problem for me and my family as money was tight at home. I received $10 a month allowance and I had no job.

One ball of wool was 45 cents, so you could buy two balls for $1. That’s 20 balls for the $10 a month allowance. Each ball of 4ply wool would make about four squares.

So you needed 180/4 = 45 balls of wool for each blanket. You could buy the wool you needed for about thirty dollars all in. I only bought new wool when I had finished the last ball.

Our teacher Miss Tyler brought big skeins of wool into the class room and rolled up lots of balls for those of us who were struggling financially. She encouraged us and she herself was an old girl from Jeppe. She was an old head girl I think, not sure…

How many blankets did we make?

My class was called “form 3B” and we, along with our teacher, Miss Jill Tyler, that year we made over sixty blankets when most classes only made thirty.

Each class had thirty to thirty-five girls. The next best was the class next door form 2A who had just on forty blankets.

Looking back on this early crocheting experience I realize it shaped my whole crocheting life.